This post and comic illustrations are an excerpt from my book, The Gospel of the Kingdom for Kids, Tweens and Teens. It’s a great resource for any age group. A short, non-threatening book that is easy to share with people of all walks of life.

Now you would think if I spent my whole life going to church and reading the Bible I might look up “salvation” in the dictionary or something. I mean really, if this was for a test in school, it would be a vocabulary word and a no-brainer as a test question! So, what is the definition of the word? 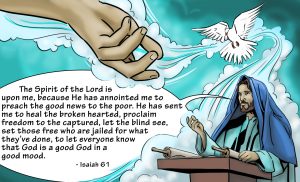 First things first: what does it even mean to be “saved” or have “salvation”? Here’s what I knew growing up: it meant to give your life to Jesus or invite Him into your heart. I didn’t have to go to Hell, and I was forgiven for all of the bad stuff I ever did. Not bad, huh?

If you look up “salvation” in the Greek language, it means:

Sozo/Soteria – Eternal life, forgiveness of sins, healing, rescued from evil, protection, wholeness (shalom), prosperity – to move forward in every area of your life.

So, not only do we get to go to Heaven when we die, get forgiven for all we’ve ever done wrong, but we also get healed, get rescued from evil, and get to move forward in all areas of our life. We are also protected by God, and we don’t have to have anything missing or broken. Many times in the Bible, the word “saved” could be translated “healed,” “delivered,” etc. Excellent deal, huh? Here are a few questions though…

Saved from what? Why didn’t we just get born this way? Did Jesus really have to die to get something back for us and if so, how did we lose it in the first place?

Father, Son, and Holy Spirit have always existed. They are perfect in every way. They chose to create a planet with living things on it. I have the idea that they wanted to spread their love. So, they agree together to create a planet and furnish it for their children. The first family was a perfect creation made in the image of God. Father, Son, and Spirit delighted in perfect relationship with Adam and Eve.

Some time before time on Earth began, Lucifer, whose name means “light bringer,” was one of God’s angels. The Bible says he used to be beautiful, and his whole body was designed to worship God. But because he thought so much of himself, Lucifer decided he would be the king of heaven and rule it instead of God. So Lucifer and one third of the angels joined him and waged war against God for control of everything. Of course they lost and got thrown out of Heaven by God. We aren’t sure exactly when this happened, but we know that it did.

Meanwhile, around this time Father God had created the earth. He breathed life into Adam and created Eve. He put them in a beautiful garden called Eden, and their job was to rule over everything and spread out God’s garden across the whole earth. Father God basically gave Adam and Eve the keys to the earth and said, “Let’s be a family and take care of this together.”

For a while, Father God and His children enjoyed perfect friendship. God even walked around on Earth with them and taught them things Himself. They knew what made each other laugh. Father loved watching them learn and enjoy what He had given them, and Adam and Eve loved their Father. 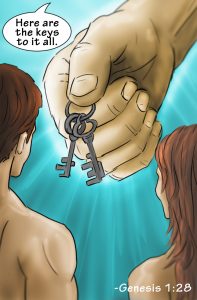 As you well know, every family has rules. This family only had two rules. The first was to be totally obedient to God as they spread the garden, which was a lot like Heaven, over the whole Earth. The second was that Adam and Eve were not supposed to eat the fruit of one particular tree because it would kill them if they did. Easy enough, right?

Well, Lucifer (now called Satan – the accuser) hated God for booting him out of Heaven and giving the keys to a mere human. Satan knew he couldn’t overthrow God, so he went for the next best thing – God’s family.

Have you ever seen someone rip up a picture or scribble on a picture of someone? It really hurts a person’s feelings when someone does that to them. So that’s what Satan started doing to God. You see, we are made in God’s image. We’re like a picture of our Father. Satan tries to rip us up or scribble on our lives because he is no match for the real thing, our maker, Father God. Instead, he picks on us to get to Him.

Remember, God gave His children the keys to the planet, and Satan lost the battle to rule Heaven. Adam and Eve were supposed to make something like a copy of Heaven on Earth. Satan wanted Heaven, but would settle for the copy. You have to realize that God and Satan aren’t equals, so there was no way for Satan to compete with God’s power.

Satan knew if he could get Adam and Eve on his side, he could take control of what their Father had given them. It was like a movie where the bitter person tries to steal the family land from those who rightfully own it. Satan fooled Eve. He told her she could be like God and know about good and evil if she only ate fruit from the one tree on the planet Father God said was off limits. Have you ever wanted to do something just because someone told you not to? You’ve got great-great-grandma Eve to thank for falling for that one. Well, she listened to Satan and ate the fruit. The sad part of the story is that Adam, who was right beside Eve the whole time, also ate the forbidden fruit. Agh! You may be wondering, “Why’d they have to be such fools?!” Honestly, they were the perfect examples of what you and I would do, so get over it. But here’s where we get into some of the things I didn’t know.