Jesus called a woman a dog when she asked for bread. She wasn’t even asking for a whole piece, just a crumb! Were you aware of that?! Here’s what happened: 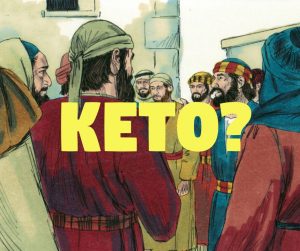 21 Then Jesus went out from there and departed to the region of Tyre and Sidon. 22 And behold, a woman of Canaan came from that region and cried out to Him, saying, “Have mercy on me, O Lord, Son of David! My daughter is severely demon-possessed.”

23 But He answered her not a word.

And His disciples came and urged Him, saying, “Send her away, for she cries out after us.”

24 But He answered and said, “I was not sent except to the lost sheep of the house of Israel.”

25 Then she came and worshiped Him, saying, “Lord, help me!”

26 But He answered and said, “It is not good to take the children’s bread and throw it to the little dogs.”

27 And she said, “Yes, Lord, yet even the little dogs eat the crumbs which fall from their masters’ table.”

28 Then Jesus answered and said to her, “O woman, great is your faith! Let it be to you as you desire.” And her daughter was healed from that very hour. Jesus Heals Great Multitudes

29 Jesus departed from there, skirted the Sea of Galilee, and went up on the mountain and sat down there. 30 Then great multitudes came to Him, having with them the lame, blind, mute, maimed, and many others; and they laid them down at Jesus’ feet, and He healed them. 31 So the multitude marveled when they saw the mute speaking, the maimed made whole, the lame walking, and the blind seeing; and they glorified the God of Israel.

As you can tell by the context of the narrative, Jesus was not condemning the woman for asking for bread instead of a high fat, low protein snack as those who ascribe to the Keto diet enjoy. Bread was a very prophetic symbol used often in Israel and in keeping with the symbolic language Jews used at that time and even now.

He wasn’t acting like a chauvinistic Jew either. Jews often referred to Samaritans or Gentiles as dogs. To mark the contrast symbolically between Israelites and Samaritans He used a relevant metaphor of the day. He was simply explaining that His primary mission while on the earth this time was to give the Jewish people first opportunity to embrace Him. It was part of the plan that Israel reject Him so that Gentiles, like this Samaritan woman, could receive salvation as well. See my previous blog, The Truth About Israel for more on this topic.

In the next few blogs I will suggest to you that this narrative represents, among many truths, healing and deliverance from demons for Christians. Yes, that’s right. Jesus tells this woman that “the children’s bread” is for Jews. He is then delighted by her faith, “gives her a crumb” and her daughter is delivered of demonic possession that same hour. Clearly Jesus made the point that deliverance and healing are for His people first.

What could ukuleles have to do with spiritual warfare? Two years ago I went through…